The Care of Veiled Chameleons 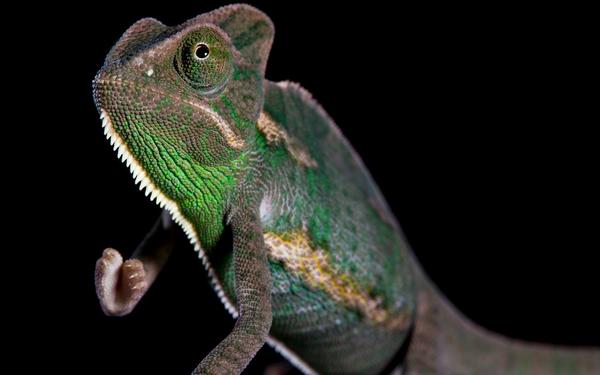 Perhaps one of the most charismatic and appealing groups of reptiles are the true chameleons. With their renowned ability to change color, eyes that move independently of each other, and long tongue used to catch prey, there are few that cannot become intrigued or even charmed by these unique lizards. While there are several species that are widely available and routinely bred, chameleons are generally more challenging to care for than many other reptiles. However, for those looking to keep chameleons, there is no better species to start with than the veiled chameleon (Chamaeleo calyptratus).

For most reptiles, the greatest success can be had when trying to recreate the natural environment of the animal, and this is one reason why the veiled chameleon makes a good choice to keep. They are found in a wide range of different habitats in the area around Yemen and Saudi Arabia including dry plateaus, mountains, and river valleys. As such, they have already evolved the ability to adapt to a variety of different conditions, which makes it relatively easy to provide a suitable environment for them.

There are a couple of considerations to take into account when setting up a cage for a veiled chameleon. The first, perhaps most obvious, is that chameleons are primarily arboreal and require plenty of vertical space with crossing branches or vines to rest on.

The second consideration, which is where chameleons differ from many other reptiles, is that they require an enormous amount of ventilation, meaning that the standard glass aquariums that most reptiles are kept in are unsuitable for chameleons. The best choice for caging is one of the dedicated screen or mesh cages that allow complete and unimpeded air flow on all directions. There are also those that advocate glass terrariums that feature ventilation near the bottom or on the sides in addition to on top, but be aware that chameleons generally don't understand clear materials and often try (unsuccessfully) to climb or walk through the smooth glass.

Once you have a suitable cage, you should decorate it with either live (non-toxic) plants, artificial plants and vines, or some combination of these. This will allow the chameleon areas to climb and sit, and make for a more attractive cage.

Because of the variety of habitats that veiled chameleons naturally inhabit, they can withstand a wide range of temperatures. On the low end, I would try to avoid having the temperatures drop below the low 60's, though many keepers have kept them inside in the mid to high 60's over the winter with no adverse effects. On the high end, they can easily withstand the upper 90's and appreciate being able to bask outside in the Florida summer, though I would provide plenty of shade so that they could get out of the direct sun if they wanted.

Veiled chameleons are diurnal, so they are naturally active during the day. This means they have adapted to utilize UV rays, so I would provide them with a UV lamp. If you are giving them time to bask outside, the natural UV will be sufficient, but you probably want to supplement when keeping them inside.

Like other chameleons, veileds are primarily insectivorous. All of the standard feeder insects, including crickets, worms, and roaches, will be readily accepted, and it is generally a good idea to gut load and use supplements to ensure complete nutrition as you would with other reptiles. In addition, some veiled chameleons have been known to occasionally eat plant matter, which is why it is important to make sure that any live plants you keep in their cages are non-toxic.


Providing water is another area where chameleons vary greatly from most other reptiles as chameleons will not recognize standing water as a source for hydration. In order to entice chameleons to drink, you should provide them with some sort of falling or dripping water source. A long mist (sometimes it takes a few minutes to stimulate them to drink) works best, but you can also use a container of water with a slow drip. Because some veiled chameleons do live in fairly dry environments, their overall hydration needs are lower than many chameleon species, which is one of the reasons they are easier to keep. It is often possible for a veiled chameleon to receive all of its necessary moisture from its food, though you should nevertheless mist it regularly just in case.

Veiled chameleons are territorial and will not tolerate living with others in any space smaller than a large room. The males are particularly aggressive towards other chameleons, so never try to cohabitate multiple mature chameleons unless specifically trying to breed them, and promptly separate them as soon as possible.

The territorial nature of chameleons extends to being very wary of other creatures, and as such they are not a good animal to handle. They will often hiss and gape their mouths, and particularly moody individuals may even attempt to bite (though their bite is completely harmless). It is possible to ignore their overt displays of discontent and hold them anyway, but this is highly stressful for them and should be limited as much as possible.

Chameleons have an unparalleled ability to change color, but despite their representation in popular media, they cannot change to an infinite shades of color, nor do they change to blend in with their surroundings. Instead, chameleons change color based on their mood and as a form of communication. When relaxed and comfortable, a veiled chameleon should be a fairly light shade of green, perhaps with some yellowish stripes or light brown mottling. An angry or scared chameleon will develop dark black markings or potentially even turn almost all black. When trying to attempt to mate they will turn very bright, with some males even displaying reds. Gravid females will often develop yellow and black bars to tell males to stay away. There are always some variations between individuals, but with some time you will start to recognize your chameleon's mood based on its colors.

Because of their ease of care and abundance of charm, veiled chameleons are one of the best chameleon species to start keeping. Provided you accommodate their handful of special needs (such as a well-ventilated enclosure and unique drinking habits), they can be an easy addition for not only experienced reptile keepers but also for novices.